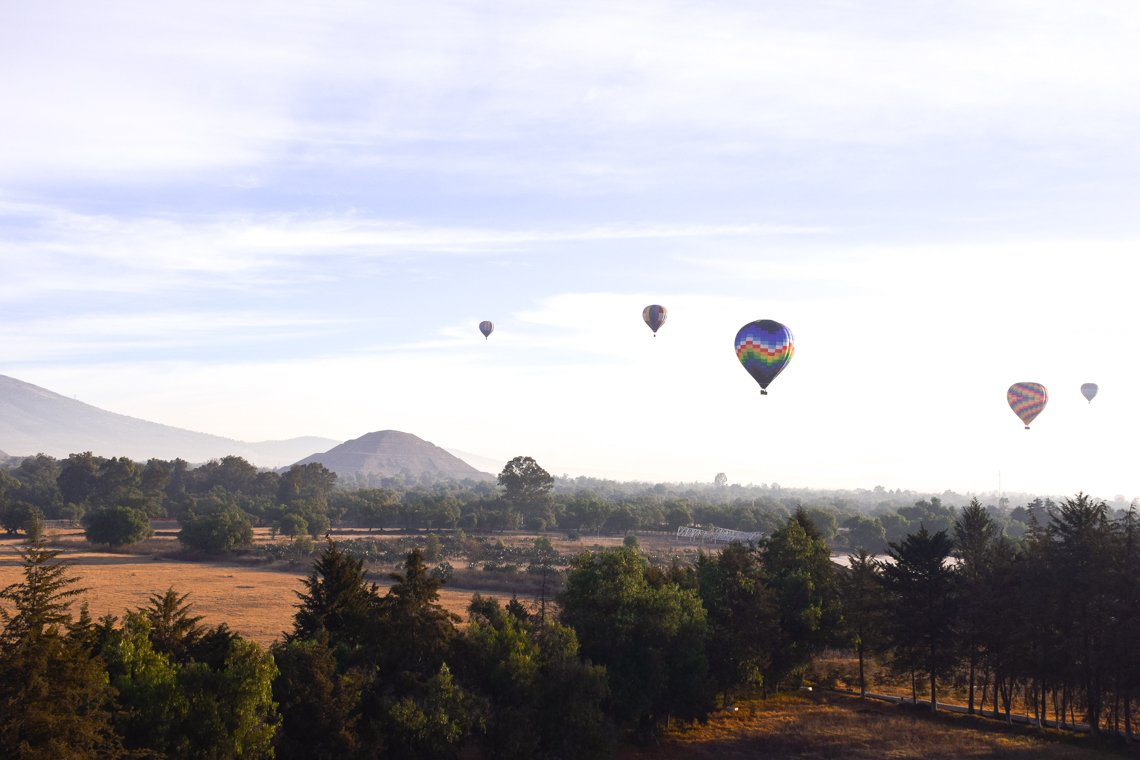 I have been wanting to take a hot air balloon tour for, forever! The ability to enjoy a bird’s-eye view of the Teotihuacan Pyramids was a dream come true. Trust me when I say, there is no better way to experience these ancient ruins than from the sky.

The Teotihuacan Pyramids (aka the City of the Gods) are estimated to be dated around 100 BC, and are one of the largest in Mesoamerica. About a 50-minute drive outside of Mexico City, the hot air balloon ride and tour of the ruins make the perfect day trip. I visited Mexico City in January, which is typically low tourist season. I was able to book my tour the day before. However, to play it safe, I would recommend booking in advance online. You can book through your hotel/hostel once you arrive, or through the tourist locations around the city center.

My recommendation: I booked through Volar en Globo through wakay.mx and the experience was wonderful!

I received a 5:30am pick up from my hotel in Mexico City. We drove about 50-minutes away to the hot air balloon office near the pyramids. Since it was so early, I’m pretty sure I slept through it. Upon arrival, I was offered coffee or tea while filling out some paperwork. Shortly after, we left the office site for the hot air balloon’s takeoff location.

Pro Tip: If you go in the wintertime, dress warm! It’s absolutely freezing before the sun rises. 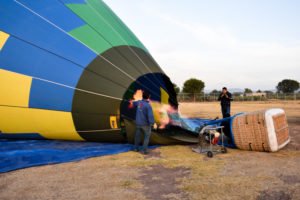 Take Off and Flight in the Hot Air Balloon

After the crew inflated the hot air balloon, we began to rise into the air around 7:30am and our tour was one of the first balloons up in the sky. It was an absolute treat to have the skyline to ourselves! 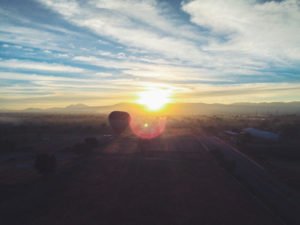 The flight duration was about one hour and the exact route is dictated by the wind. At all times a vehicle followed from down below, and was in communication with our pilot via radio. 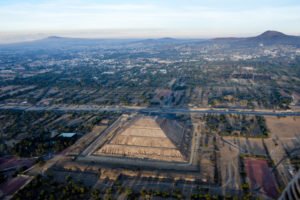 The pilot allowed us to take turns operating the hot air balloon, which was pretty exciting! 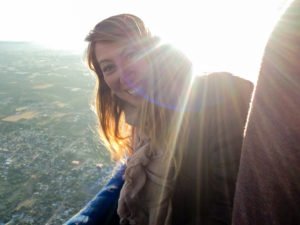 Descent Back to the Ground

After about an hour in the sky, we began to descend back down to the ground. As the crew packed back up the balloon and equipment, we got to partake in the hot air balloon tradition of popping some bubbly. At 8:30am we celebrated our once-in-a-lifetime experience with champagne and orange juice! 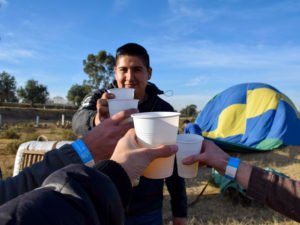 We were taken back to the site’s office, and received a flight certificate, and the option of purchasing photos of our ride taken from the go pro that was mounted on the balloon.

Optional: Breakfast and Guided Tour of the Teotihuacan Pyramids

I also opted for the optional breakfast and guided tour of the Teotihuacan Pyramids after the hot air balloon ride. I would recommend this!

By 9:00am we were chauffeured to our breakfast spot, which was a wide variety of an all-you-can-eat style buffet. We were given about an hour to eat, and then were driven to the grand finale, a guided tour of the pyramids themselves.

The guided tour included detailed information about must-see landmarks like the Pyramids of the Sun and Moon, the Temple of Quetzalpapalotl and the Avenue of the Dead, as well as the customs and cultures during that time. 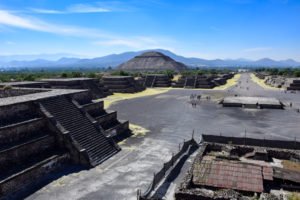 After about an 1.5 to 2 hour tour, we were chauffeured back to the hotel. Due to traffic delays, we arrived back in the heart of Mexico City around 2:30pm.

Overall it was a wonderful experience and one I would recommend to anyone making a visit to Mexico City!

My recommendation: I booked through Volar en Globo through wakay.mx 🙂

Going to Mexico City? Check out these popular posts: 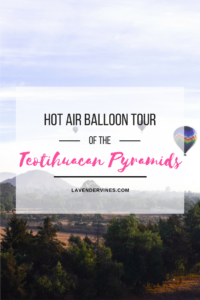 Have you been on a hot air balloon tour of the Teotihuacan Pyramids? Let me know in the comments below!

Follow on Instagram!
← Prev: Leaps of Faith - Believing in God's Provision Next: Why There No Margaritas in Mexico City →