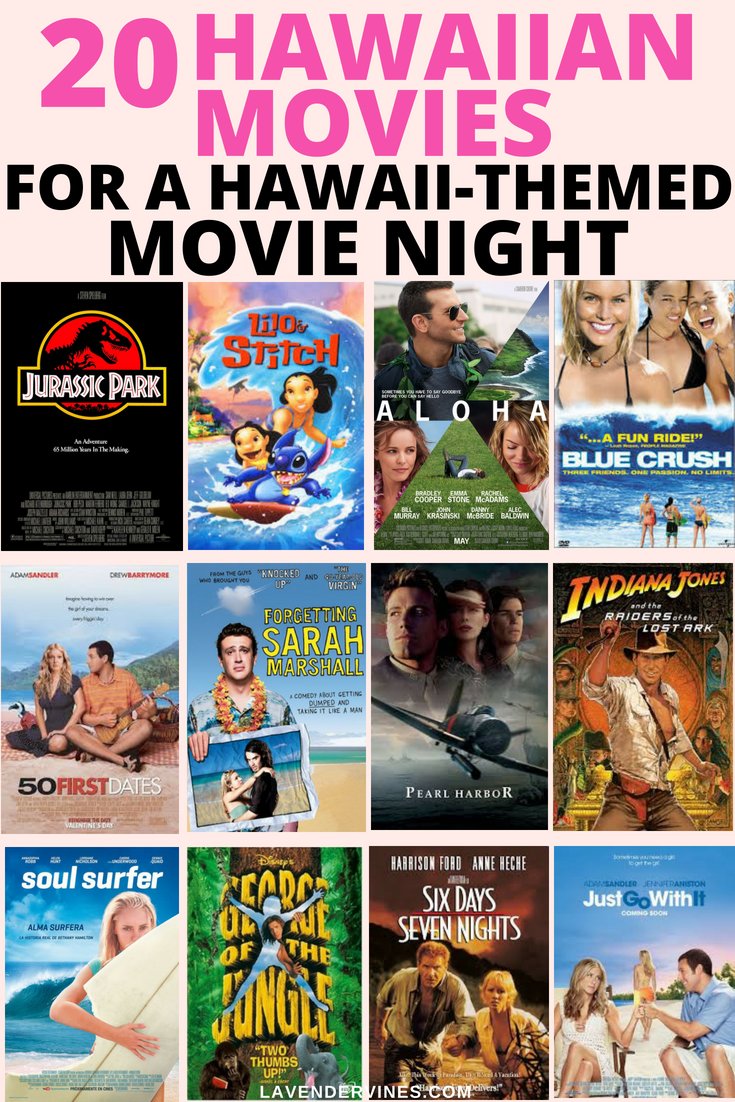 Looking for some Hawaiian movie inspiration? I recently got back from Hawaii and I don’t think I could ever get enough of it. I immediately wanted to watch all of the Hawaiian movies I could get my hands on. This lead me to create a little movie list of some of the top movies filmed in Hawaii, or that’s about Hawaii.

This list has everything from action and comedy to drama and timeless classics.  Get your popcorn ready because the Hawaiian movies listed are AWESOME, and I hope you enjoy your Hawaiian-themed movie night as much as I did. 🙂

We’re starting this list off with a bang! Jurassic Park is one of my all-time FAVORITE movies. It’s the winner of 3 Academy Awards and is probably the most popular and recognizable movies filmed in Hawaii.

Who can’t help but love this iconic movie about a bunch of scientists who brought dinosaurs back to life? With classic lines like, “hold onto your butts” and “must go faster”, this one NEEDS to be added to your Hawaii movie list.

Wanna experience where Jurassic Park was filmed? Check out my post on the Top 10 Things to Do in Oahu!

Another fan favorite. Give me Adam Sandler and Drew Barrymore all day long. They have such fantastic online chemistry. I like anything Adam Sandler does, but 50 First Dates is particularly charming.

After years as a bachelor Henry (Adam Sandler) finally meets the girl of his dreams, Lucy (Drew Barrymore). But there’s one problem, Lucy has short term memory loss and can’t remember anything that happened the day before. Determined to be with her, Henry makes it his mission to woo her every single day making this movie one of my favorite romantic comedies.

This movie did a fantastic job recreating the attacks on Pearl Harbor on December 7, 1941 and was well-received and praised and by many survivors and witnesses.

Ohana means family. Who could ever forget that line? Leave it to Disney to create a movie about an extraterrestrial alien crash landing in Hawaii and it ends up stealing hearts the world over.

Lilo is a lonely Hawaiian girl who adopts an extraterrestrial alien (Stitch) as her “pet dog”. Through this cute little tale Stitch transforms from a destructive intergalactic fugitive into a loving member of his newfound family.

You gotta love Blue Crush. Although a bit cheesy, this movie remains one of the best surfing movies and has some of the most amazing surfing scenes. A young Kate Bosworth plays the main character who is determined to show the world what she’s made of at an upcoming Pipe Masters surf content on Hawaii’s North Shore.

Anne Marie (Kate Bosworth) struggles with the challenges of everyday life including taking care of her kid sister, working as a hotel housekeeper, and of course, falling in love with an NFL quarterback while spending every other waking moment preparing for the surf contest. Typical.

Aloha was actually a box office bomb, and I really can’t say I enjoyed it that much either. So, you may be wondering, well why the heck are you recommending it?

Well, it’s directed by Cameron Crowe (who I admire) and has a star-studded cast including Bradley Cooper, Bill Murray, Emma Stone, Rachel McAdams, and John Krasinski. On top of that, it actually does a pretty good job of representing Hawaiian life and the film has beautiful Hawaiian scenery. So, go ahead and check it out, lemme know if you like it! I actually should give it a second chance as well.

Honestly now, who doesn’t love Owen Wilson? This film is about newlyweds Carl and Molly who take in their jobless buddy Randy (Owen Wilson) until he can get back up on his feet. At first it is nice having him around, but soon Randy threatens to become a permanent member of the home.

Only the beginning of You, Me and Dupree is filmed in Hawaii, however those Hawaiian scenes are gorgeous!

After struggling musician Peter (Jason Segel) gets dumped by his TV star girlfriend Sarah (Kristen Bell) he tries to get over it by going to Hawaii, only to find Sarah and her new boyfriend are in the same hotel. Awkward.

9. Raiders of the Lost Ark

Along Came Polly is one of my favorite romantic comedies. I actually think I secretly want to be Polly…

Anyways, moving on. This film stars Ben Stiller and Jennifer Aniston, and even though only the beginning and end of the film is actually filmed in Hawaii, I would definitey recommend it as an inspiring Hawaiian movie.

Just Go With It is another romantic comedy filmed on Hawaii, this time staring the hilarious duo Adam Sandler and Jennifer Aniston.

Adam Sandler plays Danny, a successful plastic surgeon who pretends to be married to enjoy dates without any strings attached. His plan works until he meets Palmer – the girl of his dreams – who doesn’t want to get involved until he’s single. Instead of fessing up, Danny hires his assistant (Jennifer Aniston) to pose as his ex-trophy wife who is now leaving him. This movie is filled with tons of laughter, I guarantee you will love it. 🙂

Another Stephen Spielberg classic. I guess we can all assume Hawaii might be one of his favorite filming locations. 🙂

Hook focuses on the adult version of Peter Pan, showing what happened to Peter Pan after leaving Neverland. Peter Pan is played by Robin Williams with Dustin Hoffman playing his nemesis, Captain Hook. Captain Hook captures Peter Pan’s children in an effort to lure Pan back to Neverland so they can finally duel it out in one last battle.

13. George of the Jungle

George of the Jungle gives you all the best jungle vibes. Although it is supposed to take place deep in the African jungle, this movie was actually filmed deep in the jungles of Kauai and Maui.

George of the Jungle (starring Brendan Fraser) is a spoof of Tarzan. George is a dim-witted by big-hearted “ape man” who saves the jungle inhabitants from various threats.

I feel like a lot of people don’t remember Six Days, Seven Nights, but I loved it in 1998 and still love it today. The movie stars Harrison Ford as a cargo plane pilot and Anne Heche a career-driven magazine editor who become stuck together after making an emergency landing on a nearby deserted island. The two are forced to put aside their differences and work together in order to survive.

The movie is supposed to take place on a deserted island in the South Pacific, however it was actually filmed on the beautiful island of Hawaii.

Mighty Joe Young was a childhood favorite, and it also made me want a pet 2-ton gorilla. A girl can dream, right? 🙂

Charlize Theron plays Jill a girl who was raised in Africa and has now made it her mission to protect wild gorillas from poachers. She also cares for an orphaned gorilla named Joe – who happens to also be 15 feet tall. Mighty Joe Young takes place in Africa, but it was in fact filmed deep in the Kauai jungles.

Okay, I am not going to lie to you, I just don’t get the hype around Tropic Thunder. However, I knowww people love this movie, so it made the list. Tropic Thunder was directed by and stars the incredibly funny Ben Stiller.

The film takes place in Southeast Asia but was actually filmed on Kauai. Tropic Thunder is about a bunch of actors who are dropped in the middle of the jungle to film a Vietnam War memoir. Through a series of unfortunate events they end up in the middle of a real war zone.

Soul Surfer is the inspirational true story behind real pro surfer Bethany Hamilton. In 2003, news broke around the world about how Bethany survived a shark attack but unfortunately lost her arm in the process.

This movie shows Bethany’s early years as a talented young surfer, and how she overcame her fears to return to surfing after losing her arm.

Let’s finish this list off with some true Hawaiian classics. Even if you don’t like old movies, you still might have heard of Blue Hawaii. Blue Hawaii is a classic Elvis Presley musical and romantic comedy about Chadwick Gate (Elvis Presley) who is fresh out of the Army and wants nothing more than to hang lose and surf all day.

Blue Hawaii takes you back in time at a less developed and untouched version of 1960’s Hawaii.

South Pacific opened in 1958, which was actually one year before Hawaii officially became a state. This movie takes place on a Pacific island (not necessarily Hawaii) during WWII and centers around an American nurse who falls for a French plantation owner. She begins to have second thoughts about their relationship upon discovering that he has fathered two mixed-race children.

If anything, this film will give insight into the types of prejudice and complications between loving relationships at that time.

20. From Here to Eternity

And finally, we are ending this list with the classic film of all classic films, From Here to Eternity. This story takes place days before the attack on Pearl Harbor and focuses on Robert E. Lee Prewitt, a boxing champion who wants to put that part of his life behind him. However, he soon finds challenges in his new Hawaiian military life.

I hope you enjoyed this list of Hawaiian movies! There are so many movies filmed in Hawaii, however this list definitely covers the best and most popular options. I hope you enjoy your Hawaii-themed movie night. 🙂

What are your favorite Hawaiian movies? Let me know in the comments below! 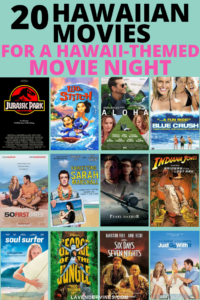 Thankful & grateful to live in this beautiful city

Spend more time in the Word this year by using th

IDEAS IDEAS IDEAS!! Back in the day I used to go l

I’ve seen you move the mountains, and I believe 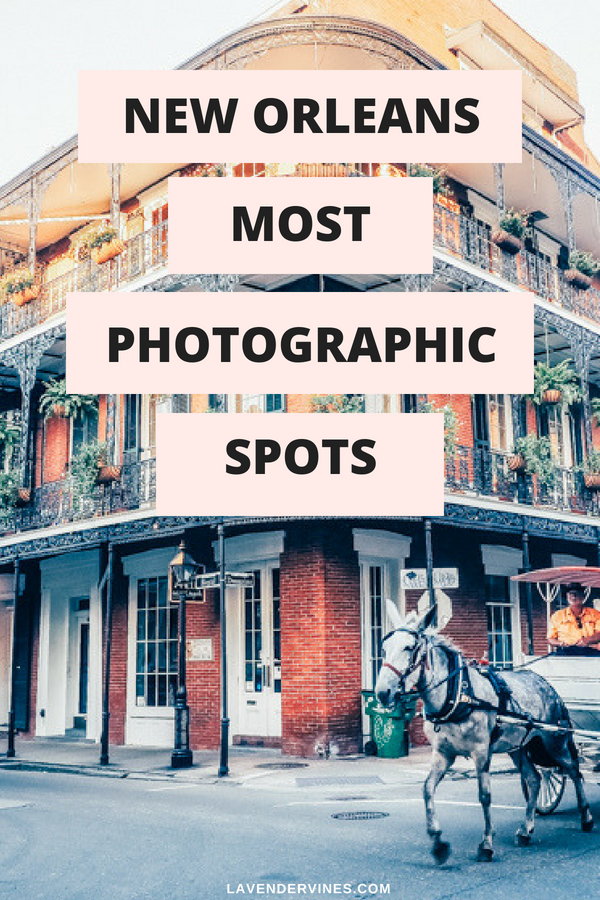 New Orleans is honestly a photographer's dream!   What's not to love?   There's the French-inspired...