The “Antoni Gaudí” Guide to Barcelona 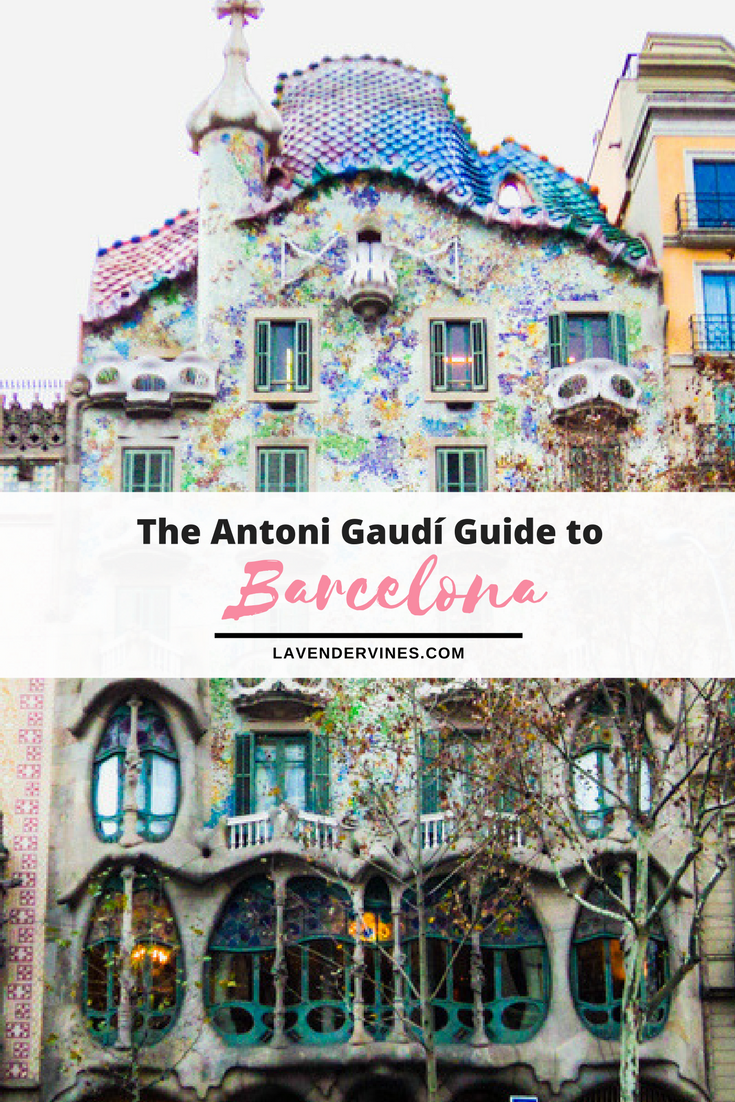 I am so excited to share this Antoni Gaudí guide to Barcelona! I lived in Barcelona for one magical year, and was constantly inspired by Antoni Gaudí’s work. You will see his designs speckled all over the streets of Barcelona, and over the course of a year, I visited (almost) every creation by Antoni Gaudí.

From lamps, to buildings, to churches, you’ll find it everywhere! In this post I am listing either my personal favorites, or the most popular pieces. Ready to learn more? Let’s go! 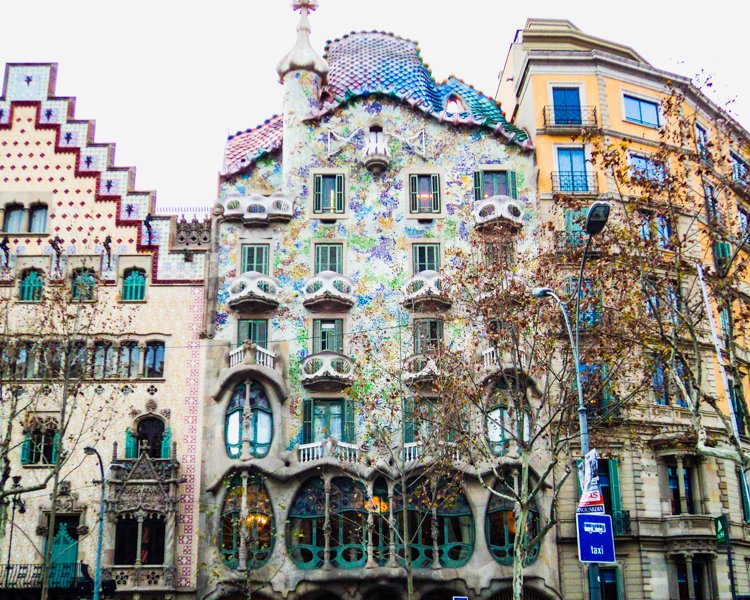 The “Antoni Gaudí” Guide to Barcelona

Antoni Gaudí was Barcelona’s famous designer and architect. If you’re not familiar with him, I bet you’ve at least seen his work without knowing it. Antoni Gaudí was a Spanish Catalan architect who had a very distinctive and unique architectural style. In fact, his style was so distinct that upon graduating from the Barcelona School of Architecture, the Dean said, “I do not know if we have awarded this degree to a madman or to a genius; only time will tell”.

Regardless of opinion, his work is undoubtedly one of a kind. He is usually considered the master of Catalan Modernism. His work truly cannot be embodied in any one style, and defies any sort of classification. Antoni Gaudí’s work is incredibly imaginative and creative, and was heavily influenced by nature.

It make sense to start at the beginning, so let’s take a look at this lesser-known and simpler piece of art designed for Placa Reial. These lampposts are worth noting because they were Antoni Gaudí’s first public project. 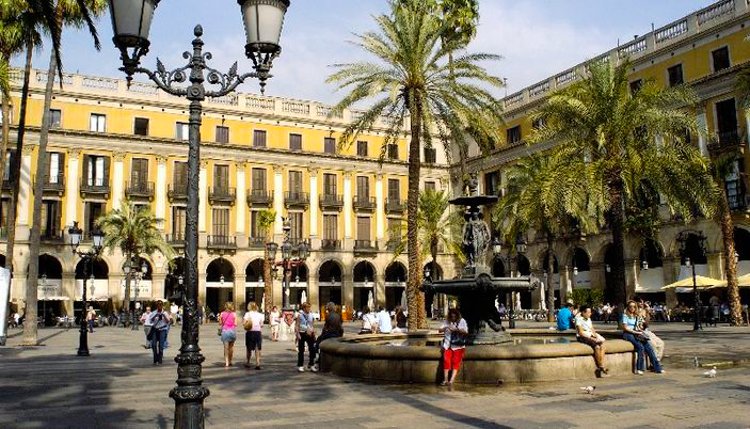 You can already see his creative imagination take place as the details of the lamppost feature a helmeted lantern with dragon coiled around the base. 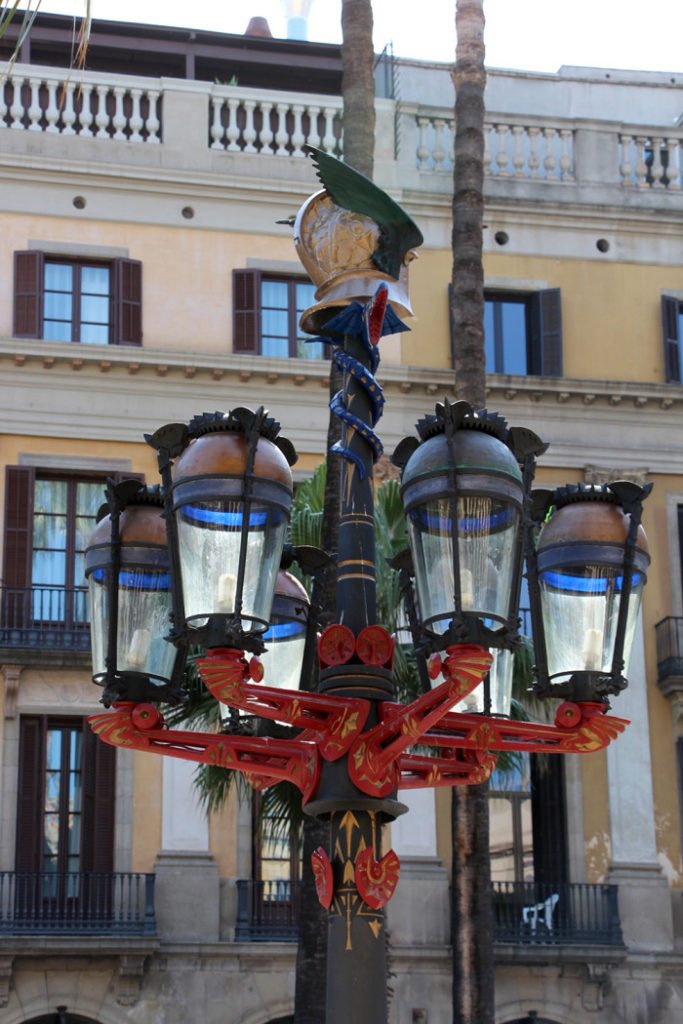 Now moving on to Antoni Gaudí’s masterpiece! La Sagrada Familia is Catalan for “Holy Family”. It is probably Gaudí’s most famous piece of architecture, and it hasn’t even been completed yet. Antoni Gaudí abandoned other projects and devoted himself entirely to this piece of art until he sadly died at the age of 73. The Roman Catholic basilica is estimated to be complete in 2026.

Although the basilica is incomplete, it still attracts over 2 million visitors a year. Tours are available, and tickets are can be purchased in advance online. 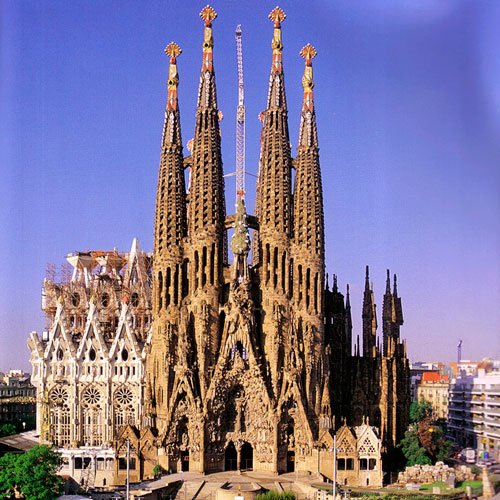 Casa Batlló is my absolute favorite of all of Antoni Gaudí’s work! Its design is so special and unique, it seems to be a created straight out of a fairytale. The building has irregular and oversized windows, with the exterior façade entailing of flowy stone work decorated with colorful mosaic tiles.

The roof is also quite elaborate, with a scale-like arched roof, similar to that of a dragon.And my favorite piece of the whole design is the bulbous, root-like tower, topped with a cross. 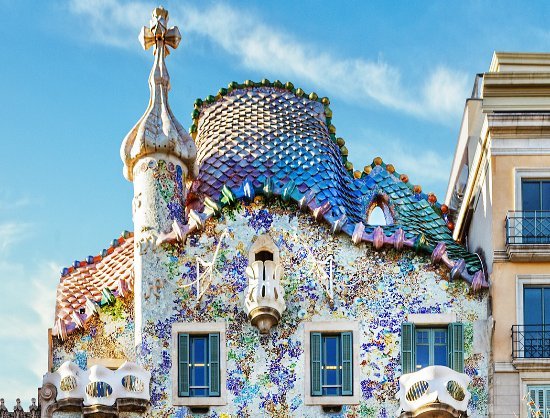 Casa Milà is actually an apartment complex. It combines two separate buildings, with a hollowed out interior. The building is 9-stories high, and the exterior façade is similar to Casa Batlló in that it is designed to have a flowy, curvature to the building. 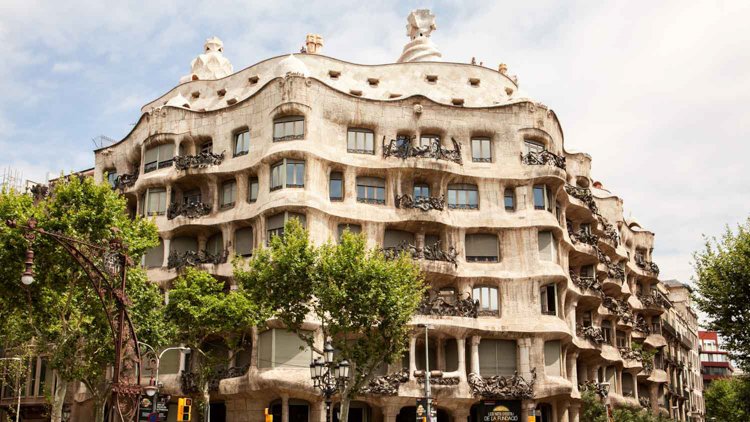 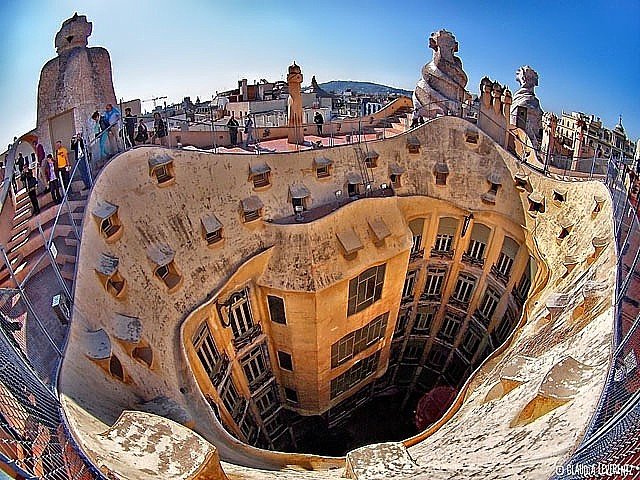 The most note-worthy feature, however, is the roof. The stepped roof consists of six skylights and 28 chimneys that are unlike anything you’ve ever seen. The chimneys have a soldier-like look to them, and the roof is commonly called the “garden of warriors” because the chimneys appear to be protecting the skylights. 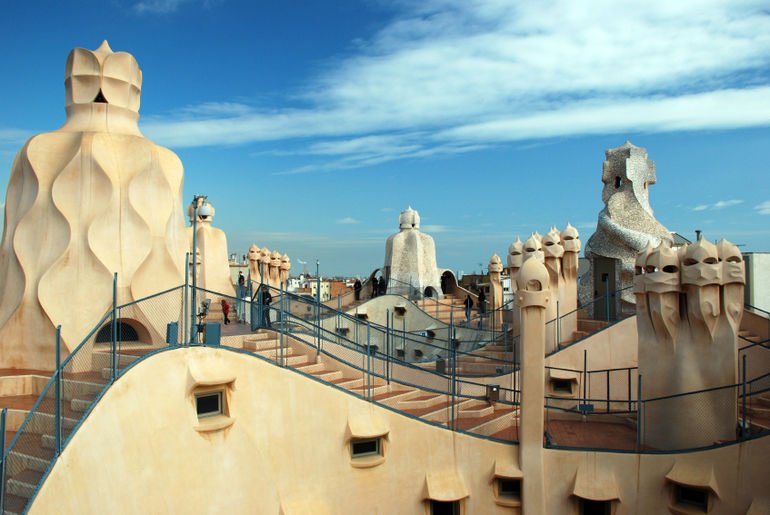 In the heart of Barcelona (just off la Rambla), this urban palace was designed and built for Spanish entrepreneur, Eusebio Güell at the beginning of Gaudí’s career. Due to the pair having many common interests, this project become one of many collaborations, as they continued to be lifelong friends.

The home was designed to be a functional palace, centered around the main room for entertaining high society guests. Complete with two arched front iron gates to welcome horse-drawn carriages, the building’s design exemplifies the art nouveau style. 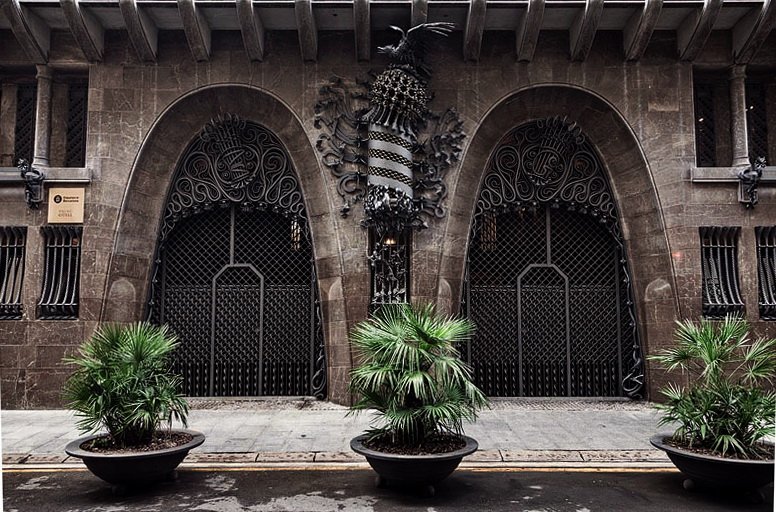 True to the wonderfully quirky appeal of Gaudí’s designs, the rooftop chimneys represent his signature technique of using colorful mosaic ceramic tiles to decorate his work. 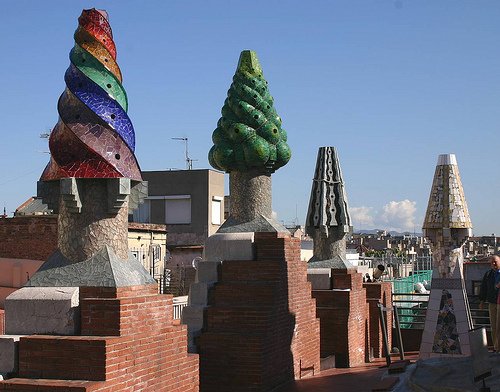 Ah, Park Güell. ? Welcome to one of Barcelona’s most famous landmarks. You simply cannot visit Barcelona without seeing Antoni Gaudí’s most colorful and playful masterpiece. It seems as if Antoni Gaudí’s imagination was allowed to run rampant, and the result was the creation of this fascinating park.

Park Güell featuring gardens, winding pathways, fountains, pavilions, sculptures, and much, much more! It’s designed with such complexity and intricate details, it would take many visits to truly absorb it all. 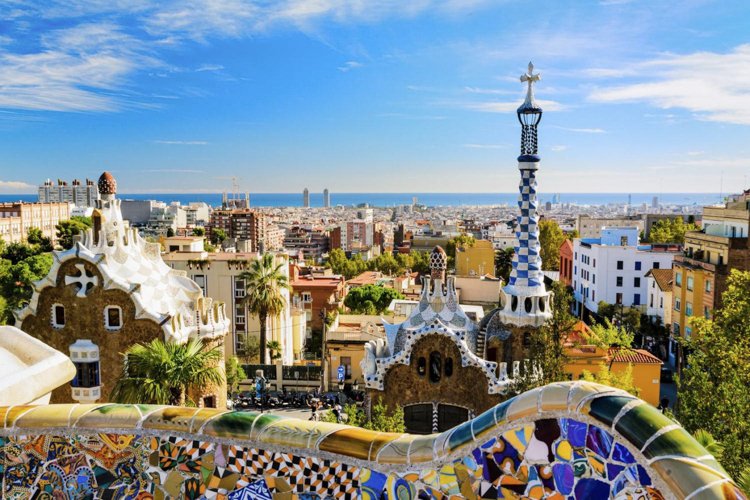 A bit conventional for an Antoni Gaudí design, this building has an elegant and baroque feel to it. The main features of the building are the wrought iron balconies bulging out from the exterior façade and the dramatic double gaple at the top. 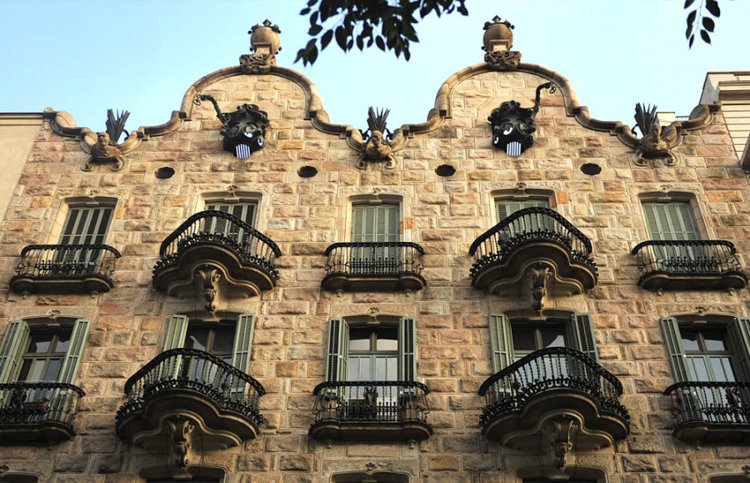 There are many more Gaudí designs around peppered around Barcelona (large and small), but these will definitely keep you busy during your visit!

The 5 Best Tips for Amazing Photos When Traveling Solo 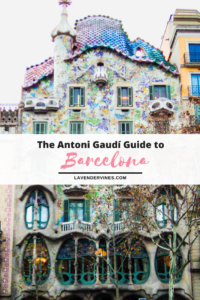 What’s your favorite Antoni Gaudí design in Barcelona? Love to know in the comments below!

Follow on Instagram!
← Prev: Does God Want Us to Beg? Next: The Ultimate Guide to Antoni Gaudí’s Park Güell →