What’s the Difference Between Mezcal and Tequila? 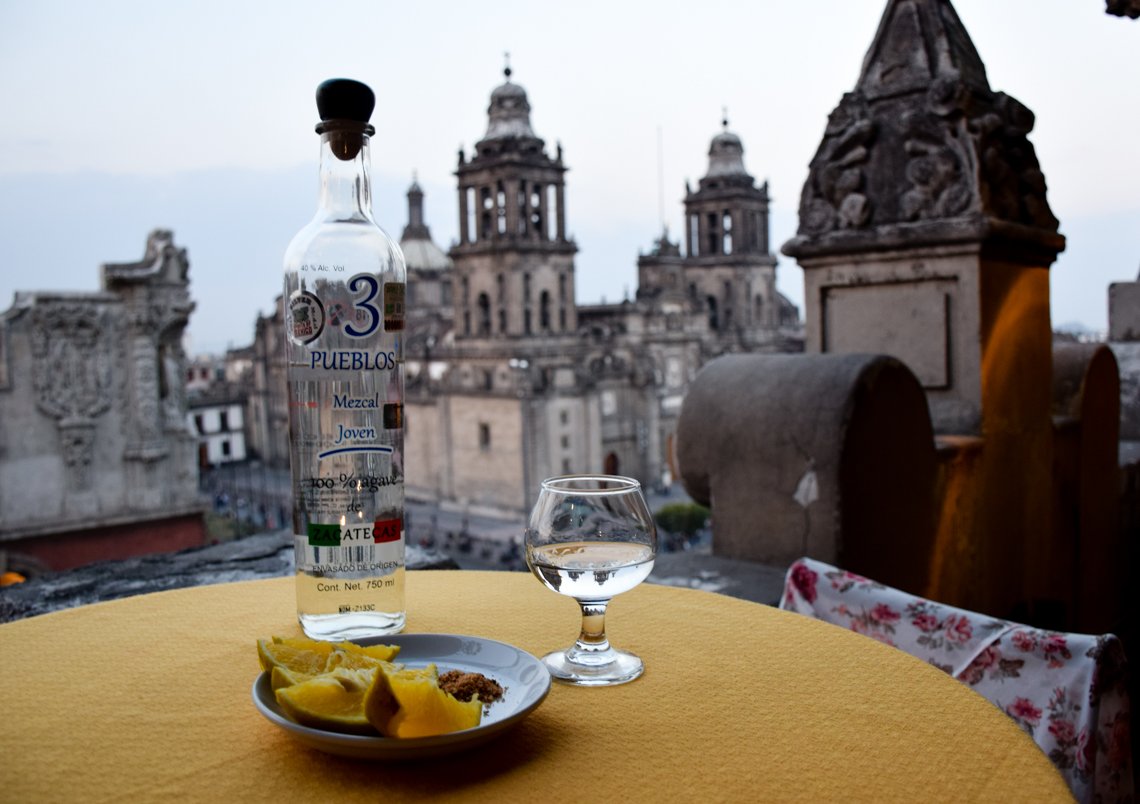 Just about everyone’s heard of the extremely popular Mexican liquor, tequila. But few are familiar with another popular Mexican drink, Mezcal. Mexicans love mezcal! Mezcal and tequila are both fermented beverages made from the agave plant however, they do have a few differences.

What’s the Difference Between Mezcal and Tequila?

Mezcal’s most distinguishable characteristic is its strong smoky flavor. This flavoring is created during the production process when the agave plant is roasted in stone-lined pits. 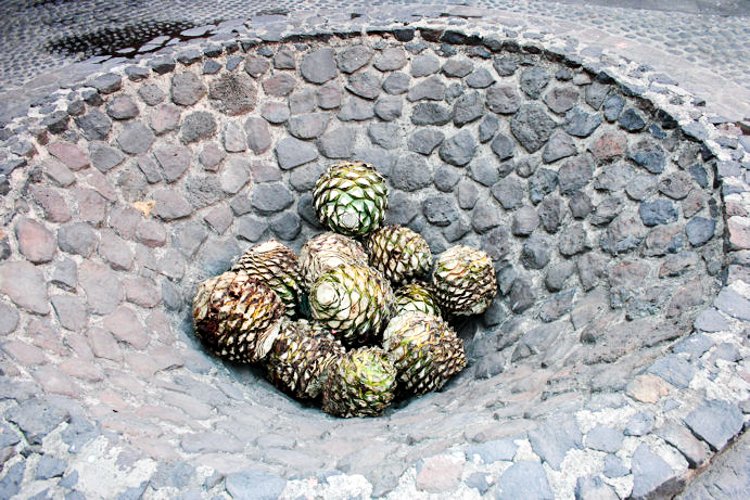 While tequila is commonly used to create the wildly popular margarita or taken as a shot with salt and lime, mezcal is generally consumed straight. 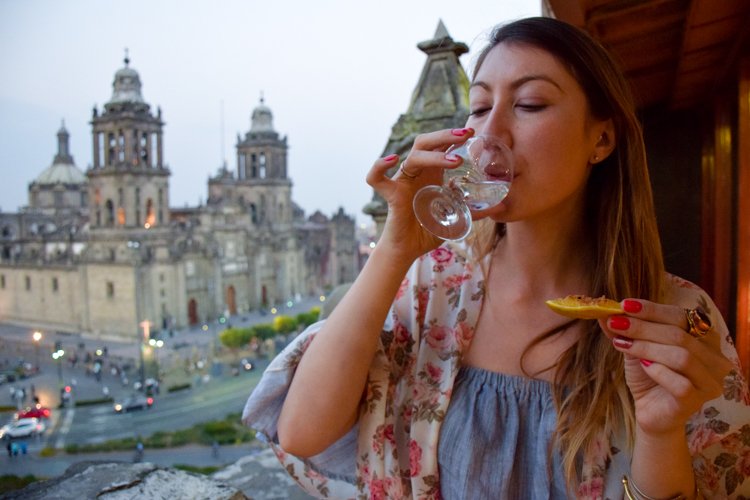 Mezcal is a classier beverage. It’s usually sipped out of a sniffer and paired with orange slices with mixture of ground chili peppers and salt on the side. 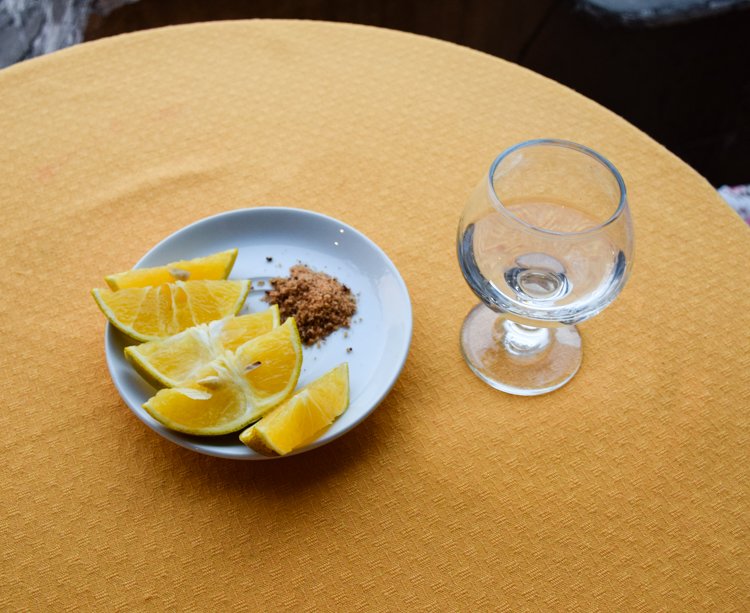 As a cheery Mexican said, “Mexicans love mezcal because it’s fuerte! (strong!)”. Higher in alcohol content than tequila (has to be 40% to be sold in the United States), mezcal is typically made at 55%. It is said that during an experiment to create a beverage with higher alcohol content, the smoky mezcal was born! 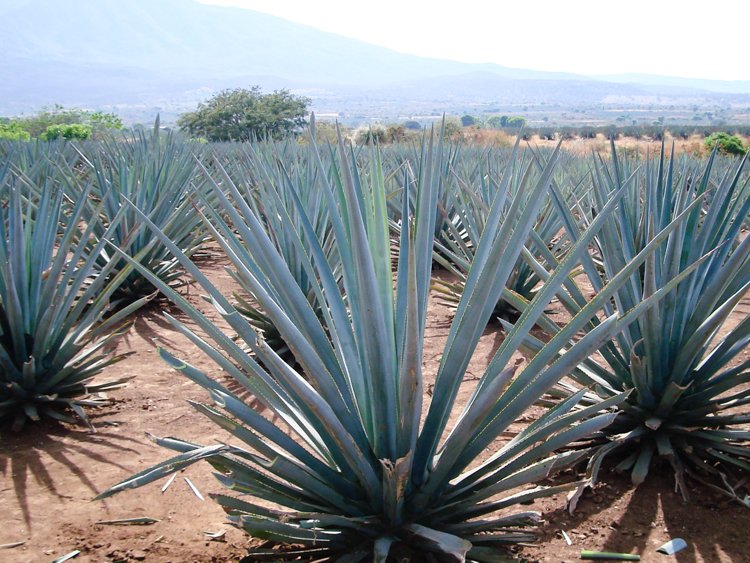 Tequila and mezcal are both made from the agave (maguey in Spanish) plant, which has been sacred since pre-Spanish Mexican culture. However, tequila can only be made from the blue agave plant, primarily found in the area surrounding Tequila, Mexico (hence the name). Quite strict on the matter, Mexican laws actually states that tequila can only be produced in the state of Jalisco (where Tequila, Mexico is located), and a few other municipalities. 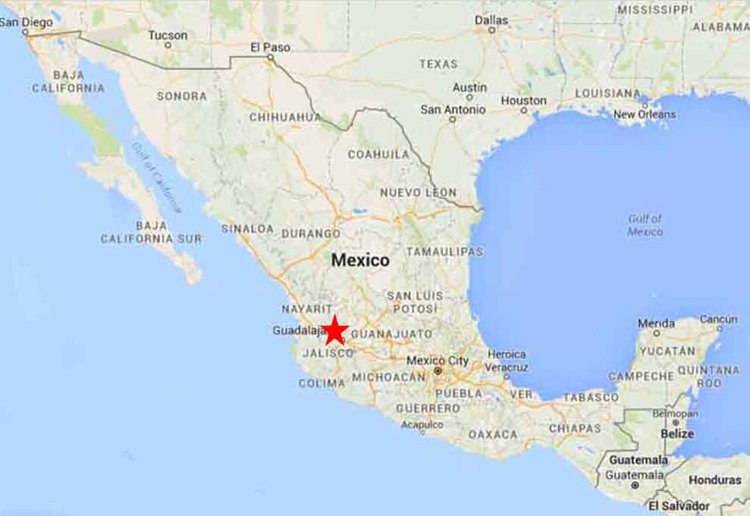 Because of this, mezcal cannot be derived from blue agave. Instead, mezcal is made from many different varieties of agave grown in many different regions of Mexico, though mostly from Oaxaca.

Fruits and herbs can be added to mezcal during fermentation to create different variations. Pechuga, a popular recipe during Christmastime, is made adding cinnamon, apple, plums, cloves, and other spices. There’s also cremas de mescal, which is sweetened and comes in a variety of flavors, such as coconut, coffee and passionfruit. 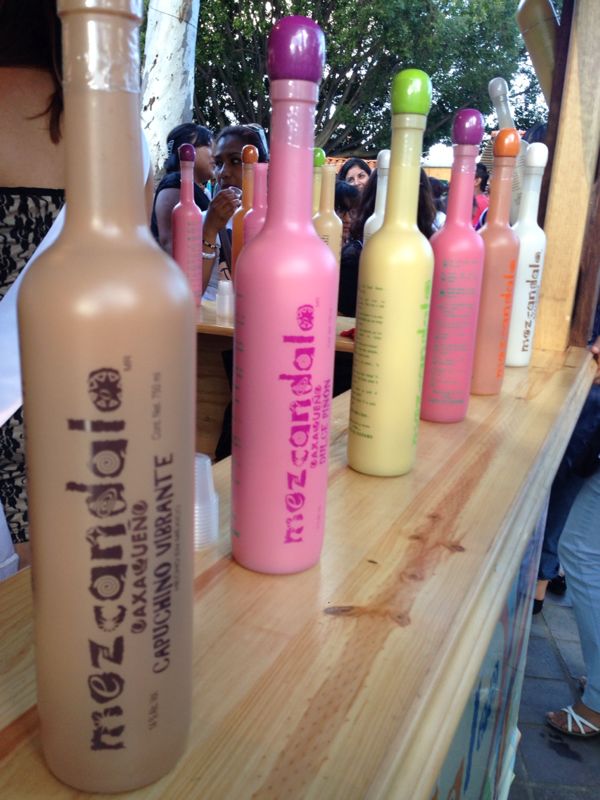 Originally flavored tequila was not allowed to carry the name, tequila. However, now the name tequila is allowed to have added flavors, with the exception of 100% agave tequila and the silver class of tequila.

Tequila and mezcal are both made from the heart of the agave plant, called the piña (because it looks like a pineapple). 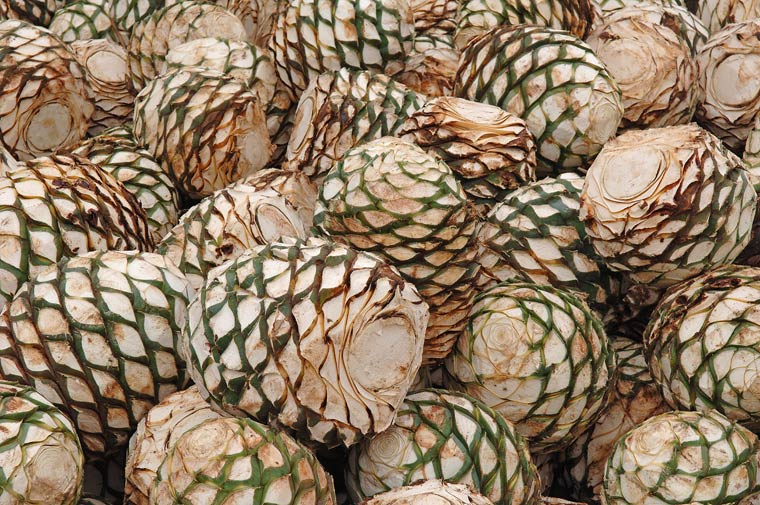 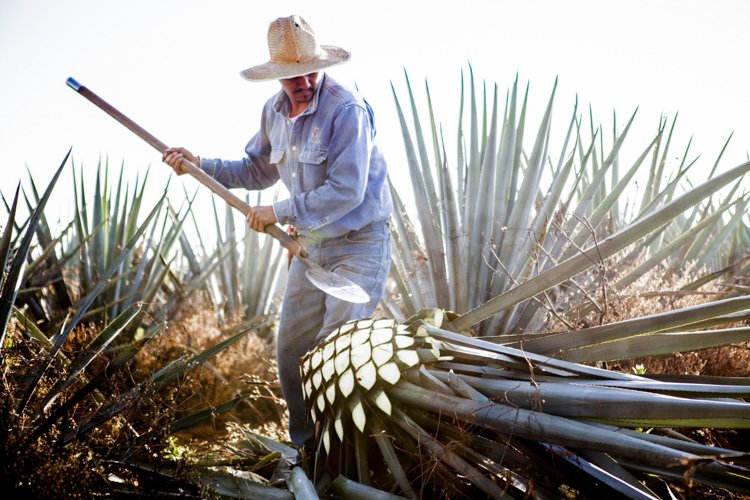 When making mezcal, the roasting of the piña takes about three or four days and is done in stone-lined pits. The pits are covered with agave leaves and straw mats, and then piled on top with an earthy mound. This underground roasting gives mezcal its intense and distinct smoky flavor. 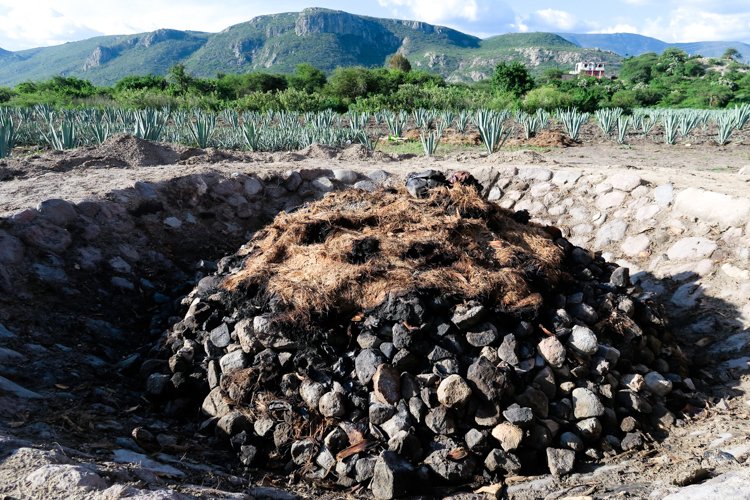 After roasting, the piñas are crushed and mashed to extract the agave juice. 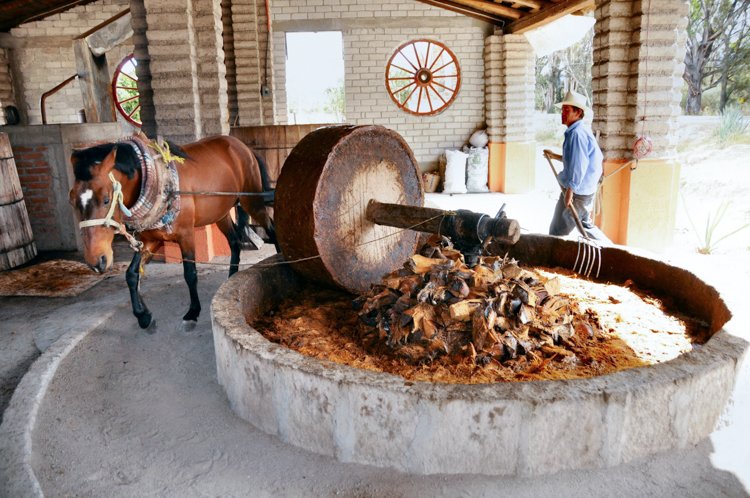 The juice, combined with water, is then left to ferment in large stainless steel vats or wooden barrels. 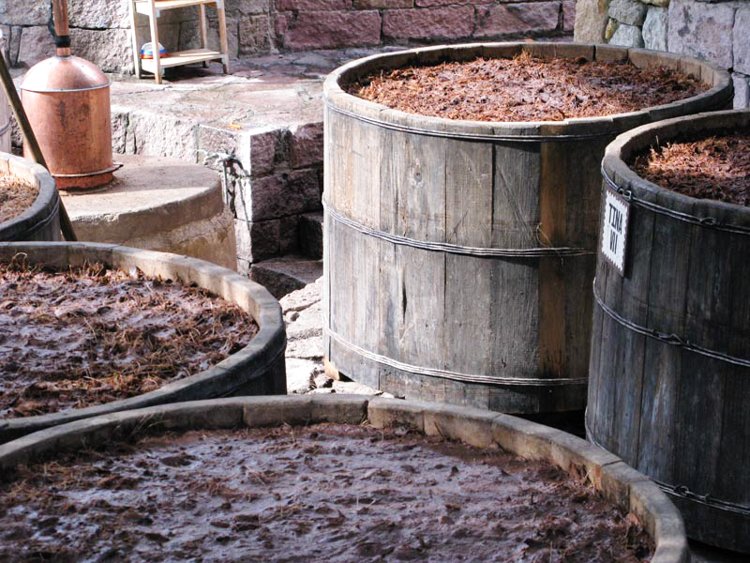 After fermenting, it is then distilled. Both tequila and mezcal are distilled twice, to produce a cleaner liquor. The distilled product can then be bottled right way and sold, or can be left to age in oak barrels. 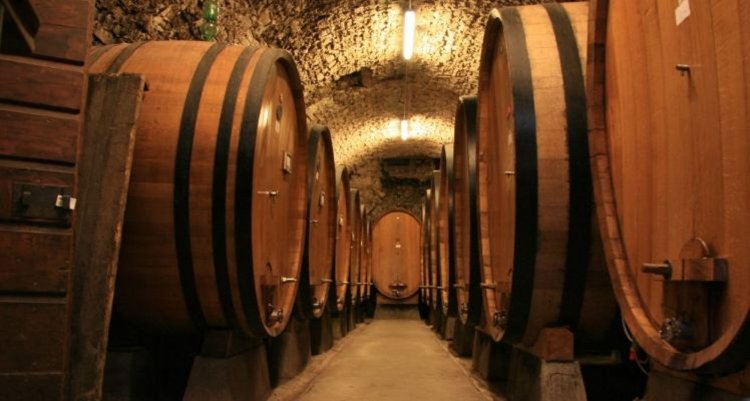 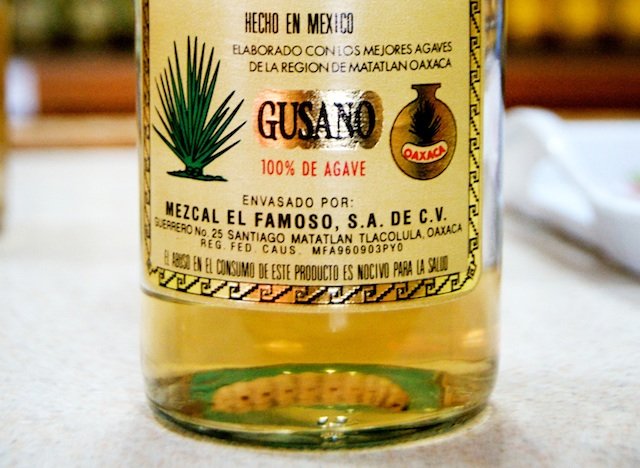 I know, gross. But only mezcal (not tequila) includes the infamous worm. Added during bottling, the worm (actually a larva from inside the agave plant) is not included all the time. Only certain mezcals, typically from the state of Oaxaca, are sold with the worm. And even then, only for aged mezcals.

There is no straight reason as to why the worm is added. Some say it adds flavor or proves the mescal has a high enough alcohol content…while others say it’s simply a marketing ploy.

Interesting note: Top-quality mezcals do not include a worm. Hmmm… ?

Extra Info: The Types of Tequila

Tequila or mezcal can be left to aged in oak barrels. This gives them a smoother, more enhanced flavor, but also increases those dollar signs. ?

Below are the typical levels of aging:

Like Mexican food and drink? Check out these popular posts: 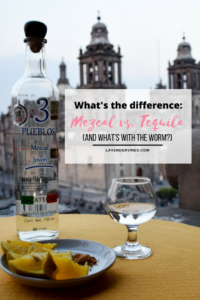 Make sense? Do you know the difference between mezcal and tequila?